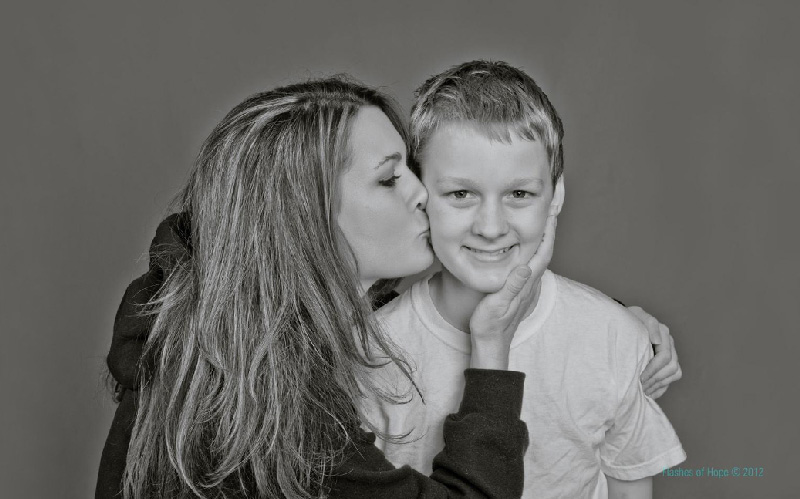 My son was diagnosed with cancer – Acute Lymphoblastic Leukemia (ALL). ALL is the most common and considered to be the most curable childhood cancer. BJ fought the ups and downs of chemotherapy treatments, being sick, losing his hair, not being able to attend school or participate in sports, not seeing friends, being confined to home, and countless days and nights in the hospital.

At 11 years old, he questioned his own mortality. There were times when we worried if he would make it through the treatments. Finally, BJ was able to return to school in the 7th grade. He still had more than a year of chemotherapy treatments to go, but he returned to playing basketball and football. The 8th grade found him healthy, tall, with a head full of hair, but we were again met with unsettling news 2 weeks before the end of his 8th-grade year. 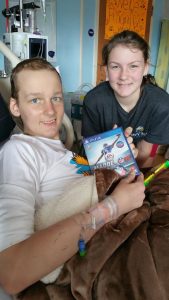 BJ and Carly Correll, Christmas Day 2015. BJ was inpatient at Levine Children’s Hospital from December 9, 2015 until February 20, 2016 when he was discharged home on hospice care.

In May 2015, at a scheduled monthly oncology visit with chemo infusion, we were told that the cancer was back. It was back with a vengeance. The news was a complete blow, as BJ had just run the Keep Pounding 5K 2-weeks prior, where he was the featured patient. He still looked healthy. On the way to the clinic that morning, we had even discussed that he only had 7 chemo/visits left.

The fight that we thought was almost over immediately became an all-out war. For the next few months, the doctors tried every possible chemotherapy. Nothing worked to lower the percentage of leukemia cells so that BJ could have a bone marrow transplant.

The cutting-edge CART-19 clinical trial at Duke didn’t work either, so in December 2015, after 2 months in Durham, BJ was transported back to Levine Children’s Hospital by ambulance. He was in serious condition. Back at Levine, we were met by his oncologist with the news that there was really nothing else to be done.

We were born fighters though, and BJ and I had made a pact with each other that we would not give up. And so, we fought—hard. I fought for him. He fought to stay. His extreme faith in God, and in God’s plan for his life was a stabilizing factor in the hourly roller coaster we were riding.

BJ had expressed interest in becoming a Navy SEAL. The day after coming back to Levine, a group of former SEALs from SEAL Swim Charity in Lake Norman got together and presented BJ with a certificate from SEAL Team 8. He was named an Honorary Navy SEAL. News channels from across the world picked up his story. 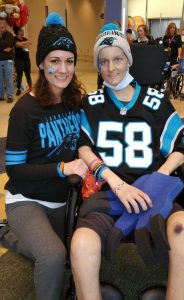 BJ Correll and mom, Michelle during an LCH pre-game rally for the Carolina Panthers in the lobby of Levine Children’s Hospital. January 15, 2016

On February 20, 2016, BJ was discharged home with care from Kid’s Path, the pediatric division of hospice. He enjoyed being home but had to go back to Levine every other day for blood, platelets, and fluids.

Deborah Norville of Inside Edition contacted me, wanting to do something special for BJ’s upcoming birthday. A friend of mine had shared our Facebook page with her. Deborah sent a film crew to video his birthday party. View the special segment here.

On Sunday, March 6, 2016, 2 days after BJ’s 15th birthday, he broke through the prison of his body and left this world. He fought to the very end—in PICU room 19, where Carly and I, and a room full of medical professionals witnessed his last fighting words, his last breath, and the desolate, solid tone of the monitor.

The Stand Firm Warrior Foundation is LKNConnect’s Outstanding Non-Profit for the month of February. They are a 501c3 non-profit organization. Their mission is to fight childhood cancer by providing support to pediatric cancer research focused on complementary and alternative treatments to chemotherapy. To continue to further the push for awareness of childhood cancer, and to provide assistance to families with children battling the disease.

For more information and opportunities to donate and to volunteer, visit: www.standfirmwarrior.org. 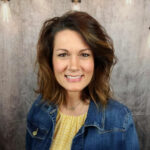 Michelle is a two-time graduate of the University of North Carolina at Charlotte, where she earned an undergraduate degree in Psychology and Sociology, and a Master of Arts degree in Sociology. She is also a Certified Biofield Tuning Practitioner and owns Love Sound Therapy.

Michelle is a single mother of two children, BJ and Carly. BJ was born on March 4, 2001, and passed away two days after his 15th birthday, on March 6, 2016, after a 3 ½ year battle with Acute Lymphoblastic Leukemia. Michelle’s daughter, Carly, is now 15 years old.

Michelle spends the majority of her time spreading love and encouragement as an advocate for children with cancer, leading the foundation she and her daughter formed in BJ’s memory. Stand Firm Warrior Foundation is a 501(c)3 non-profit organization that fights childhood cancer by providing funding for supportive therapy, focuses on education and awareness, and provides assistance to the little warriors.

RESILIENCE: Sleepless in Lake Norman - How to Get a Good Night’s Sleep When You’ve Lost Your Loved One

HEALTHIER YOU: Food Satisfaction and Portion Control - The Missing Link?

FITNESS: Fitness Lessons from Our Ancestors

FITNESS: What Does It Mean to Be Fit?

What an inspiration you are Cheryl! I will share your talent with others, thank you. I especially love the pictures!!!

I really enjoy reading Cheryls articles. She is my neighbor, friend and inspiration. Thank you Cheryl for your acts of kindness.

Such a great article! It is so true that we look in the mirror and focus on our flaws. Would you say the negative things you say to yourself to a friend?Then we shouldn’t be saying it to ourselves.