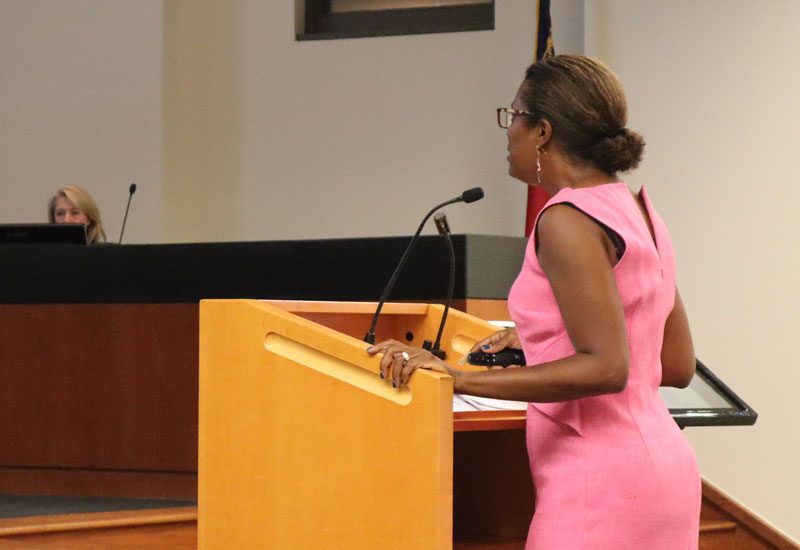 CORNELIUS NC. On Monday, September 16th, camera crews were ready when the Cornelius Town Board meeting was called to order. The cause: Town Commissioners were set to hear the Cornelius Educational Options Study Commission (CEOSC) Presentation. The reason: explore options to to mitigate projected student growth in the area in light of CMS’ lack of new construction planned in the area. 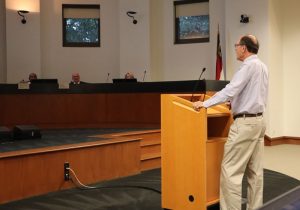 CEOSC chair Jack Higgins outlined commission’s mission and options. It was created in October of 2018 in response to Charlotte Mecklenburg Schools (CMS) Municipal Concerns Act. The act instructs CMS to prioritize capital projects (e.g. new construction) in areas that do not have the legal ability to create municipal charter schools over the next 15 years. This right was granted to Cornelius and Huntersville by the state earlier in 2018.

The five options were:

With projections calling for a 10,000 student capacity increase for the North Mecklenburg area, option 1 was not favored.

Partnerships (options 2 and 4) were not heavily explored due to a legal inability for existing charter schools to change their charters, for municipal constraints, and a lack of willingness for CMS officials to meet with the commission.

When discussing the feasibility of opening and operating a municipal charter school, CEOSC member Cynthia Bush [shown above] highlighted a lack of suitable town-owned properties large enough to house a school. As such, the town would need to rent local property.

While tax revenue would cover the approximate $1 million/ year cost of operations for such a school, the town would need to come up with that number for startup costs to establish a school before students were enrolled and those funds would become available. Bush also pointed out that, due to Cornelius having the least student growth of the North Mecklenburg area, the town would be in effect subsidizing Huntersville and Davidson. 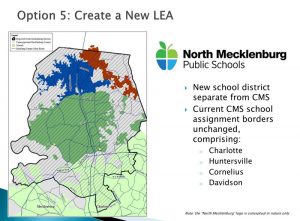 The option that garnered the most attention was the creation of a new Local Education Area. Town Commissioner Kurt Naas, also a member of CEOSC, led the discussion of political and legal hurdles; specifically new legislation by the state and CMS ownership of titles for existing area schools.

While Naas pointed out that the “last time a district divided [in North Carolina] was in 1957”, it is important to note the rational there was a separate Indian school in Warren County. Naas suggested that any work towards a separate LEA should follow existing boundaries in CMS for the North Mecklenburg area. Commissioner Dave Gilroy declared a new LEA as the “perfect solution” and that, although he is a big fan of CMS, its size “defies common sense.” Mayor Woody Washam continued to request a repeal of the Municipal Concerns Act and declared that now is “not the time but we may come to it in the future” when considering a new LEA and continued dialogue with CMS is key. 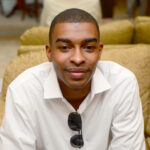 Highlights from the Mooresville Town Board Meeting October 21st

Highlights from the Cornelius Town Board meeting - October 7, 2019