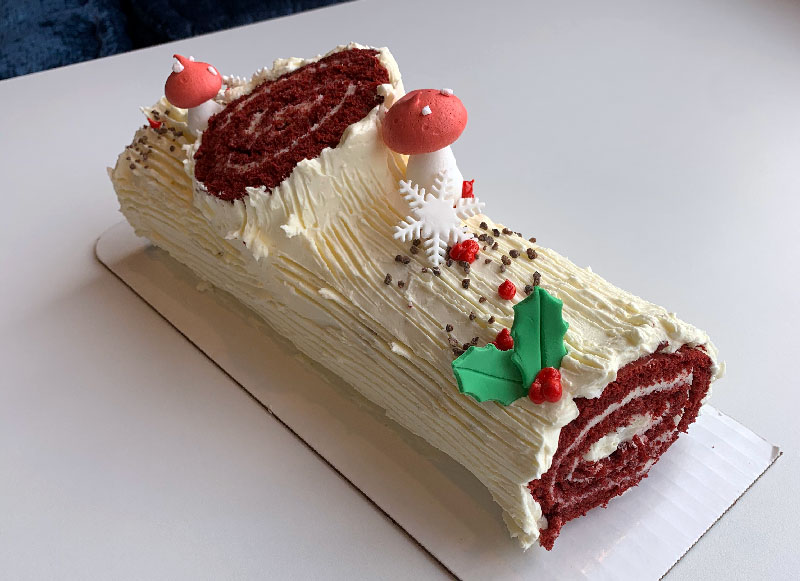 One of the most interesting aspects I find about French Pastry is that most of the desserts have some sort of story behind them. Take for instance, the cream puff-like Religieuse, which was named because the dessert resembled a nun’s habit. Or perhaps the Paris Brest, named for the route of the Tour de France and the shape and spokes of a bicycle wheel. But the most intriguing is the Buche de Noel, or as we call in America, Yule Log.

In earliest traditions the logs that were burned for winter’s solstice symbolized the events of that year. Some people would adorn the logs to enhance the celebration of memories that had passed. The youngest and oldest members of the family would carry the dedicated log to the fireplace and begin to set it aflame. This tradition was performed almost as a holistic act to cleanse the air, similar to the act of waving smoking sage. At the end, the ashes were collected and used throughout the new year to protect against evil and allow for healing.

As one traditions fades another takes its place 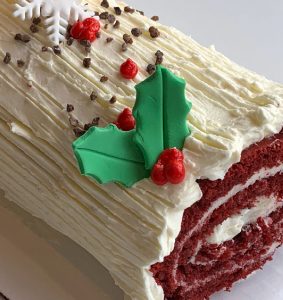 As that tradition faded, the rolled cake began to sweetly step into its place. The same fireplace, where the burning logs had originally started the tradition, was now used to bake the delicious cake that would be eaten in delight. All of the decorations on the yule log are reminiscent of things found naturally in the gardens. The most popular garnish is the meringue mushrooms. You may also find holly leaves and berries, twigs made from fondant, chocolate or marzipan. Spun sugar was used to signify spider webs. “Dirt” would be made from dried out crumbs of the cake. The classic yule log has chocolate buttercream on the outside and fork marks to resemble tree bark.

Yule logs have been gaining in popularity in recent years

Assorted flavors are widely available such as vanilla, mocha, praline, red velvet and lemon. Some of the decorations have transitioned from being edible to now being plastic. Needless to say, the tradition of having one on your Christmas buffet always makes for a memorable dessert.

The cake itself is not difficult to make

It’s the time and effort that goes into it that makes them so demanding. The items required for a yule log are:

Here is a recipe for your decorative Meringue Mushrooms!
Enjoy and have a happy holiday! 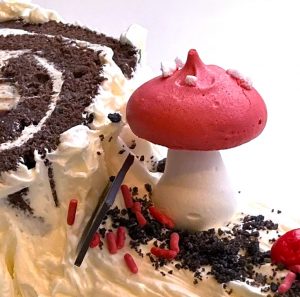 By Keli Marks of Bakery 28

Preheat oven to 185F. (If you are able to control fan speed, drop to a low fan.) 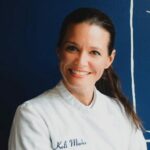 IN THE KITCHEN: Margi's Tomato Jam

IN THE KITCHEN: Mushroom & Cheese Ravioli with Pumpkin Alfredo Sauce

In the Kitchen: The Basics – Corn Muffins

In the Kitchen: Southern Tomato Pie

LLifestyleSERVING WITH LOVE: Fuzion Teen Center - Mentorship and a Meal for Teens
HHappy HourWINES: Starting A Cellar
BB2BBRANDING: Taming the SEO Monster - Incorporating SEO in Your Website
LLifestyleAdopt A Pet – Annabelle
HHealth and WellnessHEALTHIER YOU: No Time to Cook? No Problem!