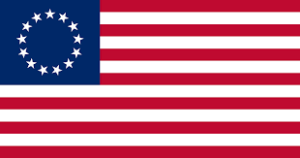 In 1949, National Flag Day was established by an act of Congress.

Flag Day is not an official federal holiday, but the President can officially proclaim the observance and celebration of the day.

Many of us, grew up being taught that Betsy Ross sewed the first American flag. Sadly, there is little evidence in the historical record to confirm this story. The first documented use of the American flag was in 1792. Read more about the original flag makers here.

Display and care of the American flag

The flag should never be displayed with the union (blue area with stars) down except as a signal of “dire distress”.

The flag should never touch anything beneath it such as the floor or merchandise.

Do not carry it flat or horizontally, it should fly aloft and free.

Blue, white, and red bunting is okay, but “festooning” the actual flag is not

The should never be used as wearing apparel, bedding, or drapery. It should never be “festooned” (gathered)—it should always fly free. Bunting with blue on top, white in the middle, and red on the bottom can be used to cover a podium, drape the front of a platform, and for general decoration.

The flag should not be used to cover a ceiling. It also can’t be used to receive, hold, carry or deliver anything. The flag should never have any mark or insignia placed upon it, but it can be used as a patch on patriotic uniforms such as the military, police or fire personnel.

The flag should not be used for advertising purposes

You should never use the flag for advertising purposes. It should not be printed on anything for temporary use that will be discarded. (If you notice our patriotic “flag” designs on plates and napkins are not genuine replicas of the American flag.)

The American flag is considered a living thing because it represents a living country. Your lapel flag pin which is a replica of our flag should always be worn on the left side of clothing in a position closest to your heart.

When a flag is no longer in good condition, it should be destroyed in a dignified way, preferably by burning. Read more facts about the US codes showing respect for the flag here.

Although burning is the preferred method of disposing of a deteriorated American flag, not many of us are equipped to perform the procedure with the dignity and respect that the flag deserves. The Veterans of Foreign Wars (VFW) and the American Legion are two groups that will accept your old American flags and dispose of them properly.